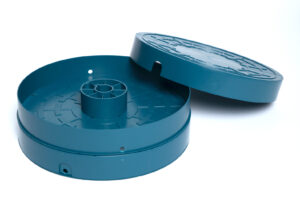 We are proud to present our program of 8 film cans in 35 and 16mm and film cores. Our stabilized film cans are the only true archival film can in the world. ( Extended term storage conditions specified by SMPTE, ISO, FIAF). We manufacture our film cans in a copolymer polypropylene called Moplen. This material is the highest quality you can get. It moulds easily, has a good feeling and no tendency to warpage.We deliver in standard in blue. Other colors on request.

All our filmcans can delivered with 2 pcs. 8mm holes for ventilation (chimneys) in 35mm cans and 2 pcs. 6mm holes in 16mm cans. This is an option. Some archives don’t want this feature so they don’t get it.

Please request prices for your area.

Manufactured for Dancan in Barcelona
Produced in Moplen Copolymer Polypropylene

Dancan features optional 11mm hole in the side for mounting of Danchek Control Eye which indicates the release of acid fumes in acetate film.

Data from independent tests performed at the Image Permanence Institute at Rochester Institute of Technology shows that Dancan Plastic Film Can has passed the PAT Photographic Activity Test (Per ANSI IT9.16). It also conforms with SMPTE and other ANSI Standards.

For other languages use